Skam France publishes clips and episodes on many platforms, episodes and clips can be found on the TV networks' websites and starting with Season 2 on France tv Slash's Youtube channel. There is no official website like Skam but the real-time format is the same. Text message conversations are posted on Instagram stories but there isn't an offical archive for them. Characters have their own Instagram accounts which "they" post to, like the original.

The first season's premiere episode was aired on February 5, 2018, making it the first international remake to be released. The series was renewed for a third and fourth season in June 2018. Season 3 premiered it's first episode on January 25, 2019 and Season 4 premiered it's first episode on April 5, 2019. The series was renewed for a fifth season on June 12, 2019,[1] and later, it was announced on September 13, 2019,[2] that a sixth season would follow, making it the first adaptation to exceed the original series which concluded after four seasons. Season 5 officially premiered on January 6, 2020 and the full episode was released on January 10, 2020. A teaser trailer for Season 6 was released on April 17, 2020 confirming the first clip would premiere on the next day. Season 6 officially premiered on April 18. On June 11, 2020 official France tv Slash Twitter account [3] confirmed that Skam France was renewed for two more seasons - Season 7 and Season 8 . Central characters are unknown. Shooting will start in September of 2020. 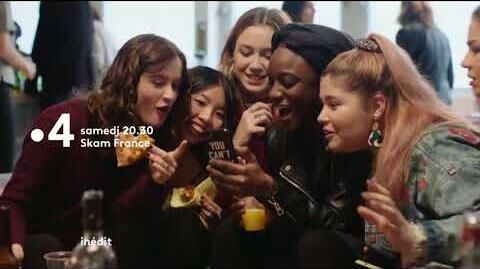 Retrieved from "https://skam.fandom.com/wiki/Skam_France?oldid=11145"
Community content is available under CC-BY-SA unless otherwise noted.